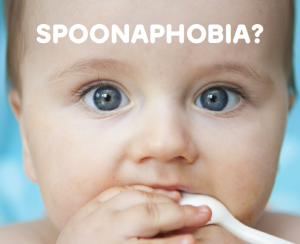 What is spoonaphobia? Remember the first time your child lunged for the spoon you were feeding him or her with? You, of course, outmaneuvered them, avoiding a hostile takeover. But in the months that followed, this moment would repeat itself over and over again. The ambivalence you felt about turning the spoon over to your little one, that fear of imminent disaster, we call Spoonaphobia. 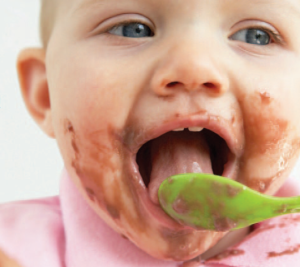 Oh, it’s real. And it’s a fear shared by parents the world over. But the reason Spoonaphobia exists is because we’re going about this whole self-feeding thing all wrong. We’re setting the stage for failure by handing a spoon to a child who doesn’t have the skills to properly use it. Disaster is imminent. But it doesn’t have to be.

This short brochure, Spoonaphobia, was written in cooperation with Melanie Potock, author, media expert and international speaker on the topic of “feeding”. Melanie offers a self-feeding path to the spoon that is, well, more pragmatic and less explosive. She shares the technical reason behind the spoon’s failure, along with tips and advice on selecting the right utensil for your child. In less that 5 minutes, you can conquer your Spoonaphobia. Now, if someone will please provide a remedy for Coulrophobia.

3 years! That’s how long it’s been since Jessica and I came up with the crazy idea of developing a pre-spoon that would help kids like our son, Conor, who have struggled to learn the spoon. People often ask what keeps us going. This blog post is our answer.

In early April of this year, we awoke to an email from a new customer. She had bought a set of NumNums a couple months earlier for one of her twins. Both twins were preemies, but one was battling feeding challenges. Her issues were so severe she had a G-tube for months. After finally conquering the bottle, mom decided to start introducing solids. It didn’t go well. Below is an excerpt from the email. I’ll let mom’s words tell the rest of the story.

“I was losing hope that she would ever eat solid food. In Feb, I came across your num num dips and ordered them. Let’s just say that the first time I used them with her was the first time she was ever able to eat and swallow baby food without choking, gagging, or freaking out. That was Feb. Now, two months later, she is eating not only baby food, but also table food and just about anything that is offered to her! We are now using the num nums to help teach her to self-feed (their intended purpose). She has come such a long way and I would like to say it is owed to the num nums. I don’t know where she would be if we hadn’t discovered them. I belong to a pediatric feeding disorder Facebook group and shared my little one’s story along with a pic of your product in hopes that they can do for someone else all that they have done for us. They truly are miracle spoons!”

The spoons aren’t the miracle in this story. Everyone who reads this blog post knows that. But hearing stories like this is truly what keeps us going. I emailed Alyce, our customer, about this post and she gave me an update on her daughter: she has graduated from feeding therapy and is now in speech therapy. We’re so happy for her and her daughter.

We developed the NumNum GOOtensil because we wanted to help kids who were struggling a little. At the time, we had no idea just how much some of them do struggle. I can’t imagine the strength, courage and patience it must take for parents in situations like this to face mealtime after mealtime with love and support. Thanks so much for sharing your story, Alyce! I’m sure it will inspire parents everywhere. And it gave us exactly what we needed to keep going.